Reclaiming the Individual in Marx

The historical adaptation((Testing inline fn)) of every thinker adds a sedimented layer to their philosophy. Very few have received more posthumous disciples and despisers than Marx. This is no accident. Marx argues that we must evaluate the world by way of theory, and the reverse is also true; theory must necessarily be valued based on its practical effects.((Karl Marx, “Theses on Feuerbach” in Robert Tucker (ed.) The Marx-Engels Reader (New York: Norton, 1978), Thesis VIII, 162.)) We must apply this same judgment to his thought. Hegel is judged for his alignment with the Prussian monarchy, Nietzsche was posthumously adopted by — and Heidegger unapologetically aligned with — the Nazis. Yet few claim that they have nothing to offer us today. Marxist theory was instrumentalized to legitimate revolutions and tyrants, yet we should extend his thought the same generosity; while the focus often falls on Stalinism, his thought retains the same liberatory potential that has kindled revolutionary fire around the world. We can identify the ways Nietzschean thought was able to be warped into a fascist clarion call — in the wake of such a catastrophe, the political dimensions of his thought were excised. The vulgarizations of Marxism have taken the same path; it comes as no surprise given decades of intellectual repression by both the United States and the Soviet Union — the latter of which invested heavily in only the most anti-dialectical and positivistic readings to render Marx less a radical challenge than neutralized, or even as a legitimator of the reactionary hierarchies and social relations he hated most.

Friend and foe alike have found interpretations ranging from collectivism to economic determinism, to moralizing, and (most vulgar of all) even authoritarian nationalism. There has been understandable reticence about returning to Marx given his historical usage, but there is clear and practical usage for his thought if we can excise the oppositional impulses that have allowed such violence to be done to it. The claims of determinism, oversimplification, and even laziness in Marx’s thought must be responded to; by renewing Marx’s individualism we can return to the storied issue of determinism with fresh eyes, and in this new light see the immediacy of his political imperative.

Whether being used for “socialism in one country” or rejected outright, Marx’s critics find him easiest to dispose of by surgically removing the fundamental device — the dialectic — that underlies all of his radicality. The result, in other words, has been Marxism’s reduction into oppositional and causal categories. None is more stratified than the gulf between individual and collective. While determinism might attract accusations of laziness, this abstraction has resulted in Marx being vilified — possibly more than any other philosopher in history. From The German Ideology, we can see Marx’s emphasis is almost a full reversal from what is assumed of him:

The real intellectual wealth of the individual depends entirely on the wealth of his real connections. Only [communist revolution] will liberate the separate individuals from the various national and local barriers, bring them into practical connection with the production (including intellectual production) of the whole world and make it possible for them to acquire … the control and conscious mastery of these powers, which, born of the action of men on one another, have till now overawed and ruled men as powers completely alien to them.((Karl Marx, “The German Ideology: Part I” in Tucker, The Marx-Engels Reader, 172.)) 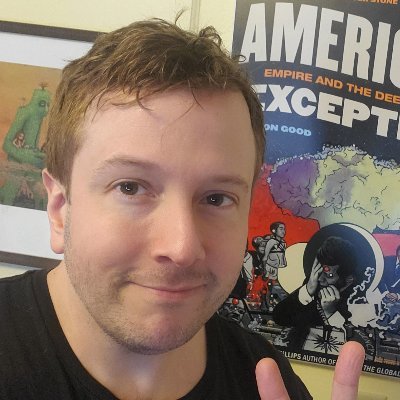 Aaron Good has a PhD in Political Science from Temple University. His dissertation, “American Exception: Hegemony and the Tripartite State,” examined the state, elite criminality, and US hegemony. It was an expansion of a previously published article, “American Exception: Hegemony and the Dissimulation of the State.” Prior to completing his doctorate, he worked on the 2008 Obama campaign in Missouri. Born and raised in Indiana, he has since lived and worked in Taiwan and Shanghai. He currently resides with his wife and son in the greater Philadelphia area where he has been a history and social science instructor.


Listen free through Soundcloud or subscribe on Patreon to unlock all the premium episodes.

American Exception: Empire and the Deep State will be available June 21, 2022.